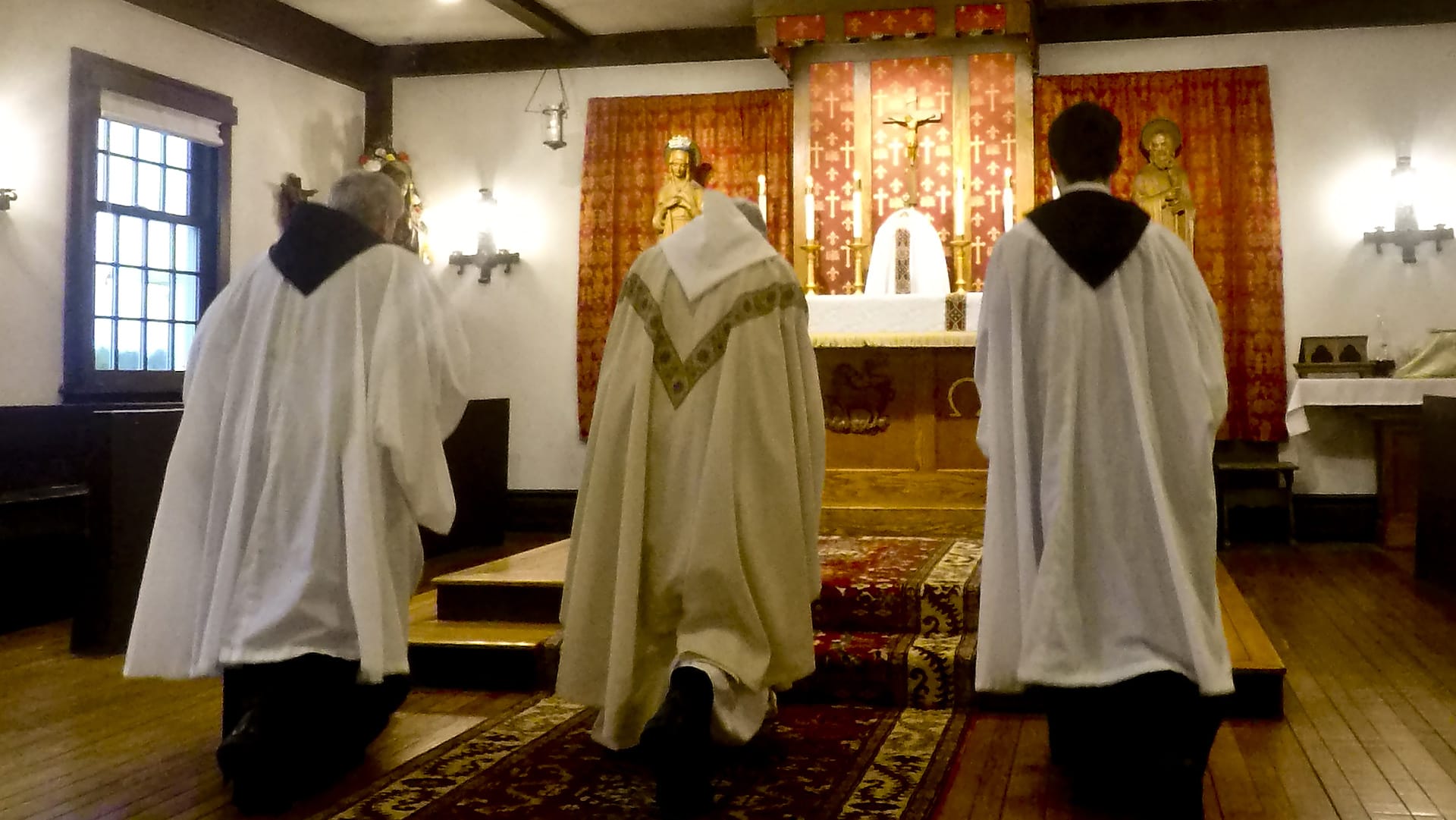 The origins of Saint Benedict Abbey go back to 1941 in Cambridge, Massachusetts, where two laymen and one laywoman established a Catholic student center to help local students live their Faith.

In the midst of the secularized culture surrounding Harvard University, Avery Dulles (later Cardinal), Christopher Huntington (later Monsignor, Diocese of Rockville Center, New York), and Catherine Goddard Clarke envisioned “Saint Benedict Center,” as it was called, to be an organization in which Christ and His Church would not simply be the object of our understanding, but be loved and embraced as “the pearl of great price.”

In 1943, Saint Benedict Center obtained the services of a Jesuit priest, Fr. Leonard Feeney, S.J., who soon became spiritual director to the growing student center located in the heart of Harvard Square and one of its most engaging speakers.
In a culture filled with doubt and skepticism, the students realized that they needed certitude about their Faith.

They came to understand that it is necessary to defend that the Catholic Church is the one true Church founded by Jesus Christ. In words of Saint Augustine and other early Fathers, the Church is “The Ark” containing and protecting the truths of Salvation through the centuries.

Dedicating themselves totally to the service of God, our founders formed a religious community under the patronage of the Blessed Virgin Mary with Fr. Feeney as superior. Like the great monastic reformers of the 19th century, Dom Prosper Gueranger and the Wolter brothers who founded the Abbey of Beuron, the community realized that actions speak louder than words. They had to be champions of the Faith not simply with words, but also by their very lifestyle. In 1958, they re-located to Still River, where they adopted a monastic lifestyle patterned on the Rule of Saint Benedict, our Patron.

In 1993, we became an autonomous Benedictine Abbey with Abbot Gabriel Gibbs, O.S.B. serving as our first abbot. Following his death in March 27, 2010, Abbot Xavier Connelly, O.S.B. was elected II Abbot. Abbot Xavier passed away on April 8, 2021 and on May 15, the community elected Abbot Marc Crilly, O.S.B. as III Abbot. It is not uncommon for one of the priests or brothers to comment, “We are standing on the shoulders of giants.”

Doing our utmost to maintain and grow this wonderful legacy, our enduring vision is to win every heart for Christ through Mary.