“May he be wise and humble. Outstanding for obedience. Calm in rebukes. Most tender in compassion. Strong in temptation. Patient in injuries. Firm in peace.” 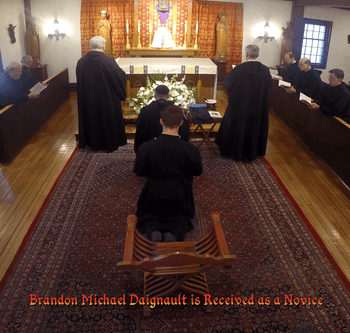 ON MARCH 25, in a powerful and moving ceremony during Vespers on the Solemnity of the Annunciation, Brandon Michael Daignault was received as a novice, taking the religious name of Brother Jerome. Brandon said he has grown to appreciate St. Jerome as a brilliant and fiery defender of the Faith.

Saint Benedict actually wrote in His Rule for Monks that entrance should not be granted easily, and the candidate must be told that monastic life is a challenging vocation and only a strong and humble man will persevere.

The ceremony is particularly moving for the other monks, not only because their ranks are increasing and another monk gives his life to God, but also they are reminded of the day they knelt and made such bold promises to Our Lord, and we are all renewed by the example of the new novice.

At this ceremony, the novice receives the black scapular over his tunic – a sign of this next stage in his formation to becoming a monk. Afterwards, Br. Jerome enjoyed a fancy dinner with his brother monks in the monastic refectory. We continued the party in Saint Catherine’s House where family and friends were celebrating in the guest dining rooms. The new novice was hard pressed to give time to all the well-wishers who came from his home town of Agawam, Massachusetts and elsewhere to celebrate with us.

Br. Jerome with Connor Collins, Grace Nichols and Mike Collins who have been good friends and Br. Jerome fans as well as regular visitors to the Abbey. 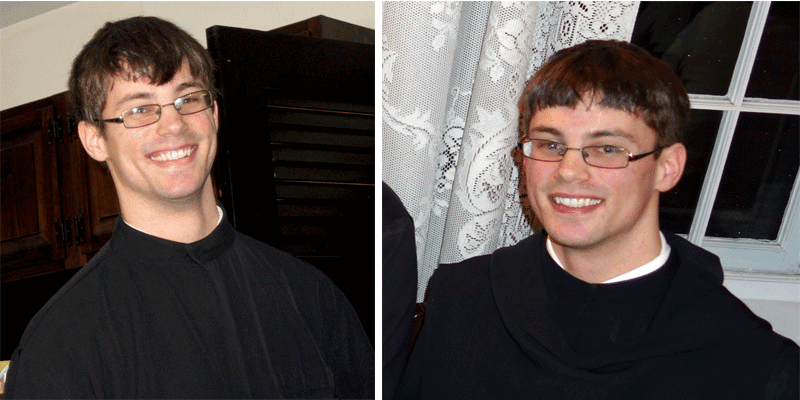 On the left, you can see the postulant garb of a simple cassock or tunic. On the right, you see Br. Jerome wearing the scapular with a hood – the beginning of the formation program for a monk. Perseverance, my brother!

After Vespers and his Reception into the Novitiate, the new novice, Br. Jerome enjoyed a festive dinner first in the monastic refectory with his brother monks and then with his family in the guest dining room.

Br. Jerome celebrated his reception into the novitiate with his family from Agawam and with former co-workers from Big Y Supermarkets.